How to spend 24 hours in Auckland without kids

Life with kids is busy. There's an understatement. Factoring in time for yourself can be difficult let alone time for your relationship, writes Asher Finlayson of Fairfax Media.

In amongst nappies, daycare, baby food, the battle of the bedtime and the surrender of having the entire family pile into your bed just to get a few hours of sleep, there's not much room for anything else.

On the rare occasion that you do have an evening out, it's hard not to spend the time clock-watching to make sure you're not too late home for the babysitter.

When we were offered 24 hours of babysitting on a Saturday night our minds raced through the possibilities, trying to think back to life before kids.

I'd heard stories of parents succumbing to the exhaustion and sleeping the night away. Believe me, that was more than tempting, but we were determined to make the most of that quality time. Time to talk, enjoy a couples massage, a slow dinner, cocktails and entertainment before that most important uninterrupted sleep.

Time is precious in these situations so rather than trying to navigate Auckland's traffic we opted to stay in the heart of the city. Looking for a one stop shop where everything was at our fingertips we landed on Skycity. With all its restaurants, bars and entertainment, it's actually a city in itself, who knew?

As the two empty car seats in the family wagon were valeted, we gave our best attempt at looking like we hadn't just stumbled into an alternate reality.

We checked into our spacious deluxe king room. It was tidy and quiet. I don't remember the last time I walked into a room without tripping over a toy or having The Wiggles blared full noise. The bed was so big that even if the kids were with us there would still be enough room for the two of us and their wriggling little bodies. But happily, there's no chance of their feet in our faces tonight.

It was extremely tempting to draw those blackout curtains, sink in and let the silence take over.

But we stood strong. There's too many opportunities to get some semblance of grownup-ness around these corridors. The thought of a couples' massage had been getting us through the past couple of manic weeks.

The therapists at East Day Spa did not disappoint. It was bliss, heavenly even. Sixty minutes of pure indulgence... I'm not ashamed to admit I drooled. I can confirm my beautiful daughter's preference to jump on me is certainly not as relaxing as the Balinese approach.

Taking time to get dressed up for the evening was fun, though to do it with a glass of champagne in hand felt a bit out of place at four in the afternoon. I was suddenly conscious that the only form of pre-loading I had been involved in of late was when the caps were going on a pamol-laced formula bottle.

We headed up the Sky Tower to catch the sunset. We ordered delicious cocktails, you know, the kind that take ten minutes to prepare and they're that good you don't mind the wait. That view formed the perfect game of eye spy too. We spied the beauty of the Auckland Harbour, the sunset and the lights of the city.  I couldn't help but think the grandparents were currently spying Frozen, for the millionth time.

The last time we got to explore the city was before we left for the classic Kiwi OE. So much has changed in five years, Auckland has come a long way. We found a the quality night-life in full force and even in short walking distance around our hotel we counted over a dozen outstanding restaurants. 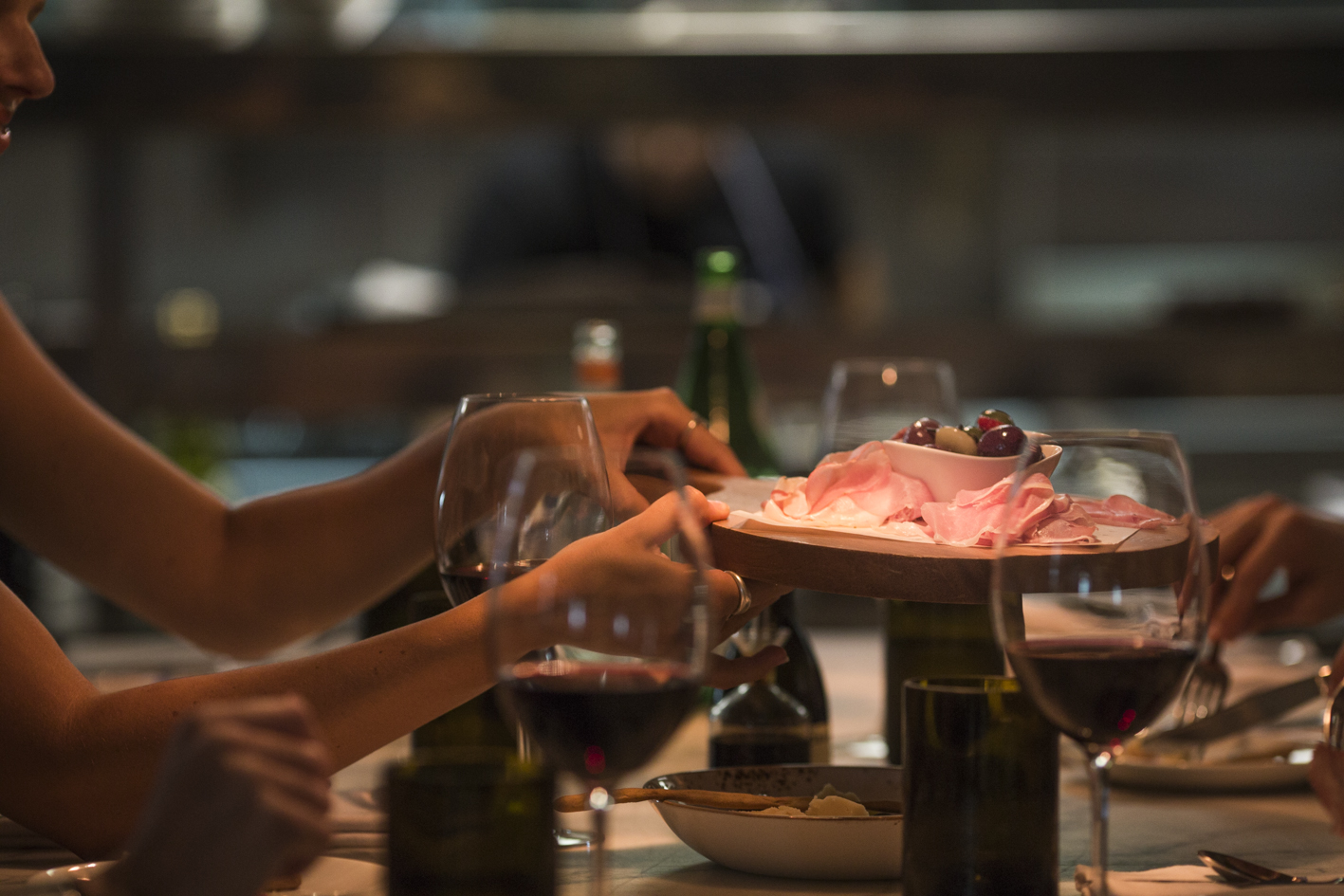 We chose Gusto at the Grand and it was everything we'd hoped for in a grown-up meal. Our 2-year-old's favourite dish is ravioli. The kind from a can. We don't fool ourselves into thinking we could make it from scratch. So when the plate of ravioli arrived without a heavy tomato sauce that covers your child's hair to their chin and everything in between, I was quietly relieved. I shall think of this dish fondly the next time I tip the can of ravioli into a microwavable dish.

Post dinner entertainment was a laugh. My wife had to show her ID to get into the casino. She took it as a win when I didn't have to provide mine. I'll take a win in that clearly I have a trophy wife. Unfortunately, that was the only winning we had on the gaming floor.

The night was certainly alive, however we weren't. We usually start yawning at 7.30pm, as soon as the kids are in bed, so we were thrilled to make it to 11.30pm. We'd fought the desire to just sleep but when a potential "normal" 8-hour sleep awaits why fight it longer than you have to?

We both woke at 5am as usual. The body clock is good like that, although as we realised there was no foot in either of our faces, nor breathing in a nest of golden locks, we both sighed, rolled over and stole another four hours.

Brunch. This is the best meal of the weekend and is something we had missed. With children, you daren't go anywhere that doesn't have wide spaces for prams or room to run around, a box of toys or better yet a playground.

The Federal Deli was somewhere we'd been dying to try. And so had everyone else as the place was packed. In no world were we getting a double pushchair down to that back corner. The staff were great, and even though my egg-making ritual had me longing for bacon and eggs and a solid flat white, the alternative menu was a welcome change. Ever had Montreal Poutine? Heart-stoppingly good, literally.

Twenty-four hours childless whipped by, but admittedly we did find ourselves missing them. So with a late checkout fast approaching, we were excited to return home to see the girls. They had such a wonderful time with their grandparents that I'm not sure they even realised we were gone. There's hope then, that there's more of these nights in store.

The writer stayed as a guest of SKYCITYEntertainment Group. For more information, see Skycity.co.nz